March 21st is World Down Syndrome Day. Down Syndrome is a congenital disorder caused due to chromosomal abnormality. There are hundreds to thousands of genes on each chromosome.  There are 23 pairs of chromosomes in a human cell.  When an extra copy of the 21st chromosome is added to its pair, it leads to Down Syndrome. It is also called Trisomy. Genes determine the traits of the person, the characters which the person carries from his parents. In Down Syndrome, the genes trait shows delay in developing the baby both mentally and physically.

The manifestations of the patients with Downs Syndrome differ from one to another. Few cases require medical care, while few can lead a healthy life with proper guidance and care.

In a broader sense, there are three kinds of Down Syndrome which are observed.

This is the most common type seen. Here there are three copies of 21st chromosome in every cell of the body instead of having two pairs.

This is a rare type of Down Syndrome. Here, only a few cells have the extra 21st chromosome.

Though the actual cause is unknown, it is understood that females above the age of 35 are at a high risk of delivering a baby with Down Syndrome. The incidence ratio is around 1:1000 if the female age is 30 to 35. It increases to 1:400 between the age of 35 and 40. This becomes more common if the female is above 40, taking the ratio to 1:100. It is not evident whether the extra chromosome occurs due to father or mother. There is no clue if the environment or the life situation of either parent before pregnancy affects the baby.

Either of the sex can be affected equally with a slight affinity towards a male child.

All races can be affected by Down Syndrome. It was observed that few races like African-Americans with Down Syndrome have a shorter life span.

Signs of Down Syndrome During Pregnancy

The IQ level of a Down Syndrome patient would be around 30-60. A few cases with low anomalies have an IQ of 20-30 points more. Though they have comparatively low IQ, these kids can still have the ability to perform but at a different pace.

Symptoms Associated with Down Syndrome

They have a flat nose, low muscle tone, small ears, protruding tongue, an upward slant to the eyes, Delayed milestones like crawling, walking, talking. They have low muscle tone, which causes difficulty in sucking and feeding for a newborn, constipation; few skills are delayed like dressing, toilet training, etc. 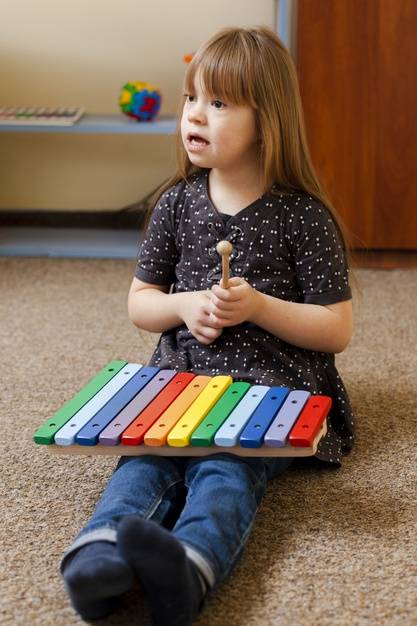 Screening tests are conducted to assess the risk of having genetic anomalies in the fetus.

Diagnostic tests actually confirm if the fetus has Down Syndrome, but these tests have to be performed in the uterus and can lead to miscarriage and other pregnancy complications.

These invasive diagnostic tests are usually recommended for women above 30 years of age, having a family history of congenital anomalies or any genetic anomalies, and who have an abnormal screening test result.

After the baby is born, if the doctor suspects Down Syndrome in the newborn basing on the physical appearance, a karyotype test can be done to rule out the chromosomal anomaly.

Homeopathy Treatment for Down Syndrome

The good thing is that majority of the above problems can be treated with supportive therapies and Homeopathy.

The parents initially might feel fear, panic, anxiety, loss of hope, shock, grief, despair. A child with Down Syndrome can improve the ability to perform if given proper guidance and treatment at the right time.

With Homeopathy, the physical and mental planes’ growth can be improved to a level where the child can be independent in performing day-to-day activities.

Delayed milestones can be avoided if the baby is given homeopathy at an early age. Memory, Immunity, and Growth can be enhanced with the help of the goodness of homeopathy medicines. Dr. A M Reddy has been dealing with various behavioral and congenital disorders in children and adults over the past decade. He has brought much-sought relief and improvements in these children bringing happiness to parents’ lives.