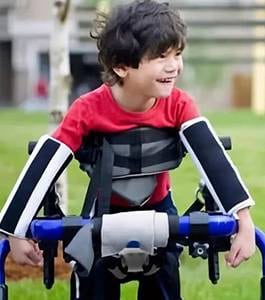 Cerebral Palsy is a neurological disorder that affects both voluntary and involuntary muscle movement. It is one of the most common disabilities faced by children.

It causes difficulty in movements due to abnormal muscle growth, problems with maintaining balance and coordination, etc. It might also cause involuntary, slow, and squirmy movement and limited mobility.

The part of our brain that controls our movement, memory, understanding and learning and communication is called Cerebrum. Damage to this area of the brain causes Cerebral Palsy.

This damage is caused by lack of oxygen in the brain during late stages of pregnancy or early stages of birth. It might also be caused due to children who are 5 years or younger, injuring their head. Sometimes, it might be genetic as random gene mutations cause abnormal brain development as well. A few types of infections at young ages could also lead to Cerebral Palsy. Children who were born prematurely or with low body weight are especially likely to suffer such problems.

The symptoms of Cerebral Palsy aren’t apparent immediately but can show themselves when the child is around 2 to 4 years old. They have delayed physical milestones like crawling, walking, etc and even when they do walk, it is uncoordinated. They can also have problem swallowing and are drooling excessively. They can have disturbed speech patterns and difficulty learning how to talk.

The upside of this is that Cerebral Palsy isn’t a progressive disorder. That means it doesn’t get worse over time. In fact, with proper care and medication, it will get better.

Homeopathy has gained a lot of popularity among patients with Cerebral Palsy and their parents as well. It is a natural, safe and long-term solution which will improve the lives of the patient in many ways.

We, here at Dr A M Reddy Autism Center have the experience and the expertise required to take care of the children in need and make their lives better in every way possible.